Is it just me?

I’ve seen mentioned in various forums that the key to World of Darkness games is that they represent a character’s struggle to remain a good and moral person in the face of horrific circumstances. Then I sit in front of my players and… I just don’t see it.

Don’t get me wrong, we have a great time gathered at the table, and nobody can make an entire bar break into “The Time Warp” like a Mastigos… but the fact of the matter is that the loss of morality isn’t only not much of a threat, most folks see it as an advantage. Once you’ve lost that Morality Dot it’s gone and you don’t have to worry about getting that potential derangement again, so commit all the petty crime you like! Heck, some folks commit the crime for no particular reason just to get that pesky Morality Dot out-of-the-way thereby preventing it from sneaking up on them from out of nowhere later on.

Now I’m all in favor of playing the character as an immoral scumbag if that’s what the character happens to be. I’ve had some shining player moments playing scum (quite literally), and as long as the player doesn’t take that as license to ruin the game session for everyone else present I say have at it. I’m pretty lucky to have the group that I have in that they know how to walk that line to the point of throwing their own characters into fugue states if it seems like they should be, or starting the game with mild narcissism because it would make for a good story element. (In fact, in this case it does.)

The pity of it is that as I sit there looking over the GM screen at my PC’s I realize something quite shocking. No matter how utterly disgusting and abhorrent a situation I throw at them, no matter how sanity blasting I craft it to be… the only one being driven insane is me. And that happened when I tried to decipher the “Mage the Awakening” Core Book!

Hell, that happened when I agreed… nay offered… to run the infernal game. That however is a tale for another day.

What I’d like to see is a sanity loss system akin to “Call of Cthulhu”. Yes, sure, you’re Mages and Werewolves and Vampires (Oh my!), but if you aren’t disturbed by seeing some poor guy have his innards replaced with modelling silicone by a bunch of stop motion puppets then I submit to you that you may actually already be deranged. In game terms though, since it has nothing to do with any particular immoral action committed by a PC there’s no chance of winding up a tad tweaked by the experience. Fortunately for me my Acanthus Mage knows how to craft a brilliant reaction to these things which generally leaves her a gibbering mess in the corner for a bit, and which in turn is highly enjoyable for me as GM.

As a side note: this has also turned Post-Cognition from being my most dreaded spell in the entire Mage core book into my absolute most favorite spell EVER!

Yet, I know they’re out there. I know some of my fellow GM’s build nightmarish visions of epic proportions only to have their players say “Oh gross! My character hasn’t eaten in a bit so I think she’s gonna go grab a slice of pizza.” What’s up with that?

And don’t even get me started on the many dumb things that will cause a character to lose morality. “Such as?” you ask? How about losing morality for casting ‘Evil Eye’ on someone who’s trying to shoot you in the face, with the intention of making it harder for said person to shoot you in the face? It’s perfectly OK to shoot them back provided you don’t actually kill them, but make it harder for them to hit you? Be prepared to roll Wisdom loss and possibly pick up a derangement. Doesn’t make much sense when you put it that way does it?

It’s all good though. There are those who say that the best way to punish a character for their actions in the World of Darkness is to make them roll for Morality loss. They seem to think that this will bother the player, and make the player think about what they did. That one didn’t work on me when I was a kid being sent to my room by my parents, and it certainly doesn’t work on me as a Player Character.  Players tend to deliberately lose morality until they reach a point where they can do what they want without worrying about it any more. This is why my Co-GM and I just came up with the best plan for player punishment in a WOD game ever. It is a plan that is elegant in its simplicity. It is a plan so brilliant that many of the players believed that we had bestowed upon them a gift! What kind and benevolent Game Masters we are!! At a monumental moment of the campaign, a moment when they could have been corrupted but instead remained steadfast and pure, we gave them each 1 Permanent Dot of Morality.

Now if they so much as think unclean thoughts we can hit them with a possible derangement for it. Squee!

I guess it’s true what they say:

Sometimes it’s good to be the Game Master.

Guardian of the Fail:

What happens when a young Obrimos Mage in his prime joins an order that’s seen too many episodes of Alias?

I bring to you:

(to use if you never want to get laid again)

IF YOU NEED HELP FROM MAGES CALL ME!

(as he hands her his FBI card with his name and phone number)
Aurdiangae of the Ailfae!!

*Yes, this was his first line. Clearly he has forgotten that Arcades went out of style decades ago.

Who thinks the paradox rules for “Mage The Awakening” really suck?

(No comments from the PC’s please. I wasn’t asking you.)

Take my word for it, they suck. My Co-GM and I can spend countless hours building an impressive array of antagonists to go up against my group of Mages (and his group of Werewolves) in preparation for the big fight at the end of a chapter, and what do my thoughtless, inconsiderate Mages go and do?

I’ll tell you what they do.

They create a gravity well the size the friggin’  building under my antagonists feet (while they, of course, stand just outside the door). This not only makes it impossible for my poor Promethean and friends to move at all (you try moving in 5 times normal gravity), but literally brings the house down on them, crushing them all to death.

We hates the Mages Precious!

My one joy in all of this is the fact that the gravity well spell is horrifically vulgar. I smile happily as I point this out and we begin to calculate the Paradox pool.

Sadly the antagonist, being a Promethean, is in an isolated and unpopulated area – so there are no sleeper witnesses. It’s the first vulgar spell of the scene, so that gives me the Mage’s Base Paradox Pool to work with. At Gnosis 4 this happens to be 2 dice. It isn’t much, but I laugh with evil glee as I select my 2 dice. Mua-haa-h…

And so this horrifically vulgar spell’s Paradox Pool is reduced to a chance die. A CHANCE DIE! What’s up with that? In the highly unlikely event that I manage to roll a success this pain in my butt will simply take 1 Resistant Bashing Damage and laugh it off. Bastard.

Clearly, something must be done… but what?

I have a few ideas:

Let’s make Paradox the nasty, scary, in your face deterrent it’s supposed to be! Who’s with me?! 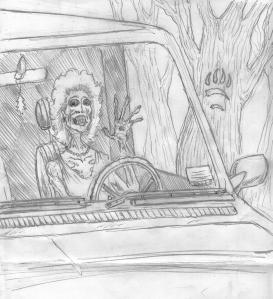 You will never receive such a text message from any self-respecting Guardian of the Veil.

You might, however, receive such a text message if you happen to regularly hang out with an Acanthus Mage from the Mysterium.

And if there is a crazy pack of Werewolves in your city.

Let me try to explain:

Way back in the beginning of 2009 someone thought it would be a great idea to run a multi-table campaign set in White Wolfe Publishing’s “World of Darkness”. The idea seemed simple, elegant even… at first. A table of Werewolves and a table of Mages having adventures in the same city in the same timeframe. Every so often their paths may cross. In theory, this was a great idea!

In reality you have a situation that no good can come of. It should have been simple. Some initial sessions for each table from modules to allow the characters to develop a bit, and then you use elements of the character’s backgrounds and current actions to build a campaign story. The Mages were reasonably cooperative with this.

The Werewolves decided to pose a body in the driver’s seat of a van to “call out” the supernatural entity that committed the murder.

They didn’t stop there though. Oh no. That wasn’t nearly obvious enough. They posed this body in the driver’s seat of the van with the keys in the ignition and the headlights on.

The headlights were shining on a tree with the Pack’s territory marker on it.

They left the driver’s door open such that the “you-left-your-key-in-the-ignition-and-your-headlights-on” tone would beep incessantly in the night.

They did this right outside of Central Park, Manhattan.

It wasn’t long before the Guardians of the Veil tasked a group of expendable, and well-respected, young Mages to find out what kind of sick, twisted, depraved abomination would do such a thing. The Mage players were not told it was the players at the table in the next room.

In retrospect, hilarity did ensue. (In fact, the looks on their faces at the very moment when they realized the truth is permanently etched into the pleasure centers of my brain.)

My co-GM and I thought, and had hoped to be perfectly honest, that this would lead to fighting between the two groups. It was only the third session of the campaign at this point and Mages are rather squishy when they’re young. In comparison Werewolves are, well they’re F@%#ing Werewolves! We were hoping for some good Player-on-Player violence out of this situation! Maybe even a good character death or two! FTW!

Instead they became BFF’s. #sigh