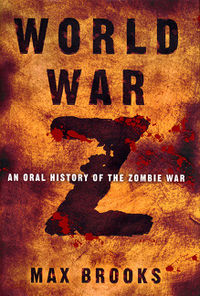 “World War Z” succeeds on every level. It is a zombie story with enough zombie goodness to please the most die hard fan of the genre. It also gets zombies right. They are frightening without being super-powered. Zombies have shock value when they first arrive on the scene, but not in the way that the old “cat jumping out of the closet” gag has shock value. The true horror of zombies is in their pervasiveness. It doesn’t matter if you are in the bleeding edge most industrialized city on earth or the most rural of tribal areas, people die and their bodies are buried somewhere. Zombies can not be manipulated, they can not be reasoned with, and they can not be intimidated. This is the horror of zombies and Max Brooks absolutely nails it.

“World War Z” moves beyond the zombies though. They are ever present, and yet they are not the one and only star of the show. The rise of zombies is a backdrop against which the story of human frailty is told. It is a story of the times in which we rise above, and the ways in which we utterly fail. Some of us face the horror with valor and conviction, others of us find a way to gain some advantage from it. Our actions can be commendable or thoroughly abhorrent, and yet they are always very real and very human.

The story is presented as a series of vignettes. Each is a snapshot of what was going on during the war against the dead. At times characters will appear in each other’s snapshots, giving us the opportunity to see someone’s actions not only through their own eyes, but also through the eyes of those around them, and the rumors that spread about them. At first glance you may be tempted to judge certain people and their responses to the threat as “evil”, but then you get to look at what they did through another lens and better understand why they did things the way that they did. You come to realize just how complex their decisions really are. “Good” and “Evil” become far less clear cut than we might like to believe.

“World War Z” is an immensely entertaining zombie novel, but what makes it so much more is the brilliant social commentary that runs through the story. You do not have to be a fan of zombie fiction to be blown away by this very human story.