← Sick Sad World of Darkness
In Other News: →

Who Let the Dogs Out?

The Mages have a mystery on their hands.  They have a body in a van, and it has drawn a great deal of attention from the mundane world. Not only is the well read though little believed conspiracy rag “Sick Sad World” reporting on this, major news outlets are reporting on it too. This is exactly the kind of thing that draws the attention of Hunters, which makes it precisely the type of thing the Guardians of the Veil are supposed to prevent from happening.

What follows, right after a certain purple haired Brit gets asked a few questions about who she is and why she’s in the city, is lots and lots of research.

WHO LET THE DOGS OUT
A ‘Sick Sad World’ Exclusive Story!

According to this article distributed by an anonymous press (download the PDF at the link above!) some art students from The Cooper Union were witness to the events of the previous evening.  Both this article and the previous one, MONSTER IN MANHATTAN, seem to indicate the presence of Werewolves at the club. The van’s headlights were shining on a symbol carved into a tree that is consistent with a Werewolf Territory Marker. The thing is, the body that was found in the van doesn’t look like it was killed by a Werewolf. Werewolves aren’t exactly known for sucking the insides out of a body while leaving the candy shell intact.

Somebody must be trying to call out the city’s Werewolves!

The Mages decide that the best thing to do is split the party. Having noticed the sidebar about the “NBC Production Employee sent home after Wild Ravings”, one group (including resident FBI Agent on Sabbatical Argus Guille, and Moros Mage Rex) will be heading to the station’s offices to track down this employee and talk about what happened. One group: Mastigos Molly, Free Councillor Neils, and the Acanthus child Marissa, is heading off to the college to talk to the students who drew the artwork. The third and final group, Thyrsus Nokoni and the newly met Acanthus Aenaiyah, are off to Central Park to see if they can be not torn apart by the city’s Werewolf community.

At the TV station Argus abuses his FBI credentials to have a chat with the production manager who sent the employee home. She informs him that the employee was working on a story about illegal casinos operating in the city. It takes a while to get inside of one, or even track one down. They move around a lot, and don’t operate every night. He had finally gotten in, without  smuggling in a camera because he knew he would be searched, when something happened that drove him totally over the edge. His manager’s suspicions involve drugs. She doesn’t believe he was deliberately taking any, but perhaps the operators of the casino were drugging the gamblers to loosen their wallets. Maybe her guy just had a bad reaction to something that they used. At any rate, she can give the FBI agent her employee’s home address, but obviously she can’t guarantee that he’ll be there. She advised him to see a doctor, but doesn’t know where he actually went after leaving the office.

At the college our intrepid Mages have little problem tracking down the artists they are looking for. Neils, being an academic, knows his way around a college campus and how to chat up the students. Molly, being a Mastigos Mage, can read minds. It’s a pretty potent combo in this situation. The fact the the law enforcement type didn’t tag along doesn’t hurt. The students are more than happy to talk about what they saw. “It was freaky man, they were like… Werewolves or somethin’. Pretty crazy. I mean… I know I was a little high… but this picture is like totally accurate…” 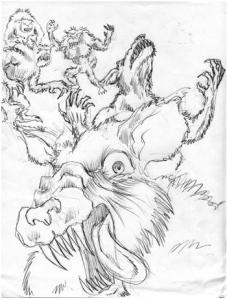 ← Sick Sad World of Darkness
In Other News: →