The Naos of Serapis!

Serapis is said to have been an invented god of Ptolemy I during the 3rd Century BC. It is believed that the creation of this god was meant to bring together the Greek and Egyptian people.

This is a lie.

Of course it is easy to see why Serapis might have been believed to be a god by the people of his day. He was, after all, Awakened as we are. We believe him to have been one of the last remaining survivors of Ancient Atlantis, or certainly very closely descended thereof.

Our research shows that Serapis was closely linked to both abundance and resurrection. By modern standards this would lead us to conclude that he is likely aligned with either the Thyrsus or Moros Watchtowers, but if we are correct that he was in fact an Atlantean he would have pre-dated modern restrictions of magic and may have been closely aligned with both Life and Death, Spirit and Matter, and perhaps even the human soul itself!

In the Bay of Abu Qir, 7 miles off the coast of Alexandria, the remains of an underwater city have been found. A structure known as the Naos of the Decades was found there some years ago. More recently another Naos has been discovered. We believe this Naos to be an entryway into Serapis’ Sanctum. While it is impossible to say with certainty what artifacts may be found there, we believe that the Hathoric Crown may have been among Serapis’ collection. This crown, according to our research, may be the key to unlocking true resurrection. Currently we are limited to mere reanimation of dead tissue. This would be an incredible find! We are sending you to the sunken city of Thonis-Heracleion to examine this “Naos of Serapis” in the hopes that you will uncover (and retrieve) the Hathoric Crown, and any other Atlantean Relics that may be located at the site.

May the blessings of the Oracles be with you! 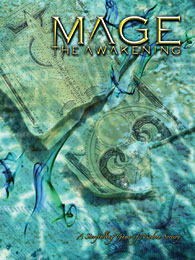 An Original Adventure for White Wolf’s “Mage: the Awakening”
part of the “World of Darkness”  game system.